My kids are obsessed with Paul Dukas’ piece The Scorcerer’s Apprentice.  You know, that Mickey Mouse cartoon in Fantasia where the brooms end up flooding the room?  You didn’t know it was by a guy named Paul Dukas?  Never heard of him even?  Me neither.  Until my kids got obsessed.

It started a year and a half ago when we were visiting my brother in Texas.  During our drive from his house in Austin to another brother’s house in the Dallas area, Drama Queen got to ride with her cousin.  And apparently one thing her cousin likes to listen to in the car is The Sorcerer’s Apprentice.  She immediately started talking about it, singing it, and, of course, acting it out.  It had captured her so much, I decided to introduce her to the Fantasia version.  Of course, that just made her (and Mr. BANG) even more enthralled. 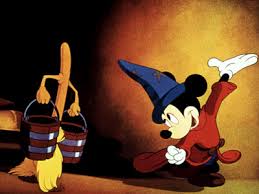 We watched the video a lot, and acted it out even more.  Finally I bought something I had had on my wish list for quite awhile:  Maestro Classic’s The Sorcerer’s Apprentice.  This particular CD is awesome because in addition to having two beautiful recordings of the piece, with and without narration, it includes the history of the tale, a version performed by a drum and bugle corps, the conductor explaining themes in the piece, and some other features.  I can tell you, we have listened to this CD a LOT!  I think all three of us have every bit of it memorized.  (I later learned it was that same CD which she had been listening to on the road trip with my brother and nephew.)

So, one day I had an idea.  I set them up with our musical instrument cards and Bingo chips in front of a You Tube video I found of an orchestra performance of the piece.  For each instrument they saw, they got to put a Bingo chip on the corresponding instrument card.  They absolutely LOVED this!  They were so eager to place their Bingo chips, frequently calling out the instrument’s name while doing so.

After playing that video a couple times, I switched to Fantasia’s cartoon version.  This time, as they heard an instrument, they placed a chip on the corresponding card.  This, of course, was more difficult for them, but they absolutely loved it, and recognized a surprising number of instruments.

We have only done this activity with this one piece so far, but it could easily be done with any number of pieces.  In fact, we have just started a study on Beethoven (I cannot tell you how excited Drama Queen is about this!!), so I imagine we’ll be doing the same activity with his 9th Symphony or another piece very soon!

6 thoughts on “Music Study: What Instrument Do You Hear?”