I’m actually a bit baffled by the subject of this post, the Montessori Green Boards.  I have two pages about them in my Language manual, and they are presented as an important exercise in developing beautiful handwriting.  When I was preparing to introduce Drama Queen to them recently, I assumed I would likely make them, but decided to check prices online first.  To my surprise, I haven’t been able to find them anywhere!  I checked several of the discount Montessori websites as well as Nienhuis, and haven’t found anything like the Green Boards described in my manual.  A search for the term “green board” only brought up personal-sized green chalk boards on which to practice writing letters.  Strange!  I considered skipping the Green Boards, thinking that they must not be very important if no one even sells them.  However, upon further reflection, I decided that I really like them and really thought Drama Queen would benefit from working with them.  So, I gathered materials to make my own green boards.

I then used a black Sharpie to trace over the top and bottom lines and the middle dashed line.  This is the child’s first exposure to lines in letter writing.

I traced over the letters in glue, then sprinkled sand from the children’s sand table over the glue.

At first I was using Aleene’s Original Tacky Glue, but it wasn’t working well.  I ended up switching to plain old Elmer’s glue.  In this pic (which I couldn’t get to stay turned the right way), you can see the top with Elmer’s and the bottom with Aleene’s.

I made these with 12×12 green cardstock I already had on hand.  I didn’t have enough of one shade of green, so I used two different shades.  Also, I couldn’t fit all the letters on one strip, so I did some taping together once the glue dried.  (I also went back over the Aleene’s letters with the Elmer’s glue.)

I let them dry overnight, then they were ready for Drama Queen’s fingers the next day.  She initially was very excited about working with them, as she is with any new material.   I first introduced the “c” board.  I explained that all the letters on that board start the same way when writing them.  We went through the letters one at a time, with me tracing, then her tracing.  It was a good review for her.  Then we traced through the whole set quickly to really feel the similarity. 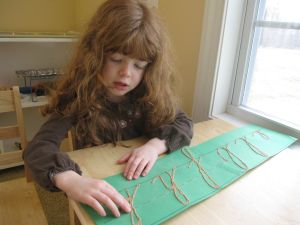 After the first board, I told her she could practice with that one more on her own, we could stop for the day and continue again the next, or we could continue right then to the next board.  To my surprise, she wanted to keep going through every board that day.  At one point, she proclaimed, “I never knew this would be so much fun!”

I put them back on the shelf after the lesson, but that evening I taped them to the closet door.  In that location, they can be an easy visual reference when she is writing, and they are low so that she can still trace them with her fingers at any point. 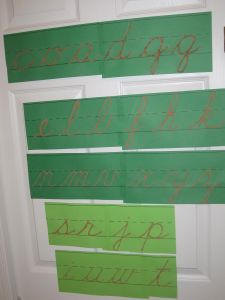